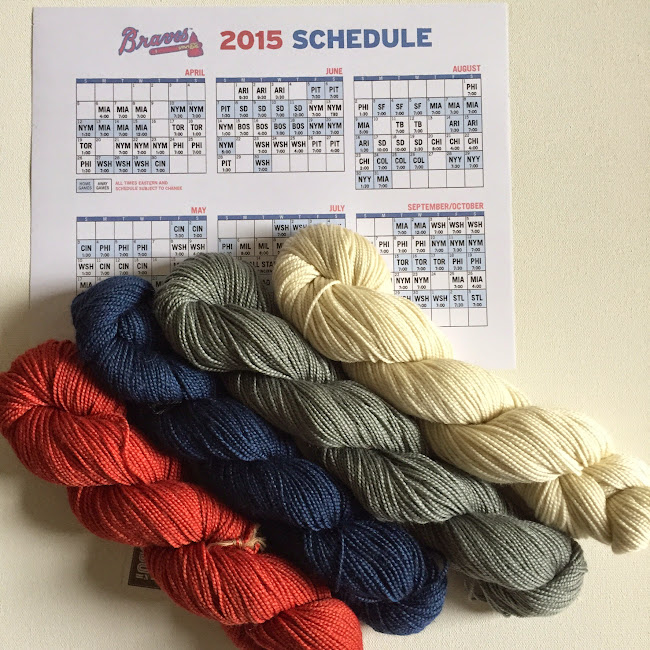 …pigs are flying again! In an effort to learn more about baseball – and hugely inspired by Kristen and the 2 Knit Lit Chicks podcast (episode 87) – I’ve decided to knit a baseball cowl…for the Braves 2015 season. The idea is that you choose four colors (Home Win, Away Win, Home Loss, Away Loss) and knit stripes according to the team’s record.
The hardest part – so far, anyway! – has been choosing the yarn. I am not a huge fan of the Braves’ red/navy/white colors. (I’m more of a gray/black/khaki girl.) Shibui to the rescue! Their Suit is a great navy, I love Brick (red – I’ve used it in two of my recent projects) and Fog/Ivory work for “white”. I’ll be using Brick for Home Wins, Suit for Away Wins, Fog for Home Losses and Ivory for Away Losses. 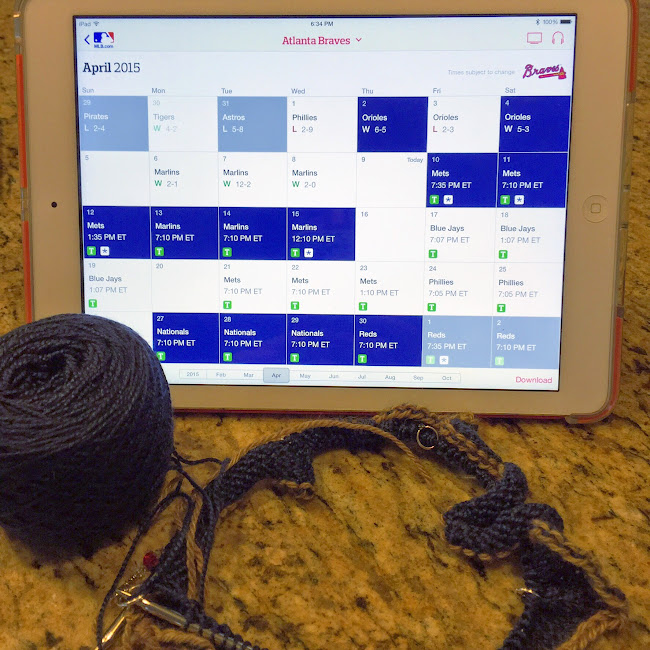 When I was planning this project, my son-in-law advised that I should choose “loss” colors I really liked since they’d likely predominate the finished piece. Imagine everyone’s surprise when the first three stripes are Suit! That’s right, the Braves WON!!! their first three (away) games vs the Marlins. Their home opener is tonight vs the Mets. I’m not even going to wind the yarn until the game is over. All I know for sure is that the run of Suit is over for another week.
Full disclosure, I haven’t actually watched a game yet. It’s Masters Week which means 24/7 golf around here … but Marc is headed to Augusta this morning so maybe I’ll actually get to see some of tonight’s game. Although my seats won’t be nearly as much fun as my sister’s – who’ll be there in person!
Are you a baseball fan? if so, which team is your favorite?