…a quick look back at the month of September through the lens of my daily photos (again, and maybe for the last time*, with fatmumslim’s daily prompts). 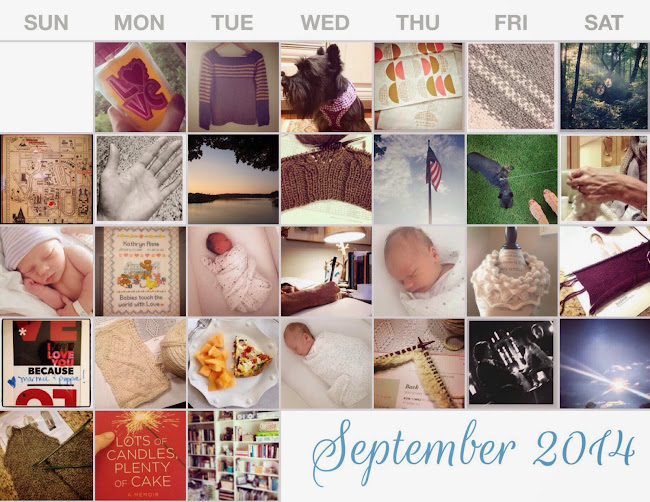 September was the Charlie show, with a little bit of knitting thrown in. He arrived late on Saturday the 13th (maybe it is surprising I only included him four times?!) I have seen him almost every day, but I haven’t taken photos every day and really, some days the prompts just weren’t newborn-friendly.
I did manage nine knitting photos, including two FOs (Ravello and Mix No 34), one swatch (Amanda, which I don’t think I’ve talked about here yet) and six WIPs (Charlie’s blanket – since finished, Wheaten – since frogged, Mix No 34 – since finished, Hudson – since finished, Amanda and Lindsay).
Two photos (Saturday the 5th and Tuesday the 9th) were from morning walks with Katie. We walked a few miles nearly every day leading up to Charlie’s arrival. Good stuff.
Two photos were from evening walks with Holly and one from a morning run on September 11.
I cooked! That frittata with fruit was our lunch last Tuesday. We have been doing better about #nosnacksfordinner, but mostly that means pizza or a salad or a rotisserie chicken from the store. I really am hoping to get into the kitchen more this month (does anyone have good slow cooker recipes that don’t use beans?)
All the other photos were taken at home (mine or Katie’s), mostly inside and mostly late in the day.
For once, though, I’m ok with that – it feels like this collage really does capture what September was. Even that blurry black and white from last Friday evening – that’s the Wedding episode from Outlander, which I watched three times (twice that night 🙂
You already know I have great plans for October. And now those plans also include better phone photos. My new iPhone 6 arrived yesterday and I think it’s gonna be a game-changer for me. The main reason I upgraded was for the camera. I’m excited to see what it can do!
…*so I’ve decided to let go of the daily prompts and just let the photos flow.

sunday in the park.