…I can’t remember the last time I talked about Project Life here (of course I haven’t talked about much here lately, so I’m sure that’s partly why). I do remember a great start back in early 2013 and I’m pretty sure I blogged about getting a new-to-me printer and how much printing my photos here improved the process. But then in mid-February I missed a week for Katie’s bachelorette weekend and before I knew it I was months behind. I attempted the first of several catchups before the wedding (yikes, that was nearly four months ago!) and finally got it all together last weekend. Yes, the first 35 weeks of 2013 are now documented and sitting in a 12×12 album under the coffee table in my family room. It makes me happy to type that. There was sunshine on Saturday and I took photos to share (but they’re still sitting on my camera. ha! I just realized my two main hobbies both require FO shots!)

That last bit of catchup covered 13 weeks: four in late February/early March; four in May/June and five from late July and all of August. I learned more about the process and how I like to work as I put it all together. I absolutely love the finished product and I love the creative process … as long as it doesn’t take more than a couple of hours and I’m not playing catchup. In all that excitement I signed up for a three-week on-line class called Project Life Lessons (one of the three teachers is Elise Blaha; I’ve followed her blog for years and love her style and her album!) Class started Thursday…and week 36 ended Saturday. No more catchup! I certainly hope to have new tips and techniques to incorporate over the next few weeks, but not yet.
My new much-simplified approach is to print all the inserts myself (if anyone wants a barely used Clementine kit, I have one for you!). I did splurge and buy a few new digital products, including both the Seafoam and Midnight Project Life core kits and a few photo/journaling cards from Paislee Press (Elise Blaha designed Seafoam and Liz Tamanaha designed the rest); but I got the album half-price at Michael’s! I’m also including a lot less – like half of what I was doing before. Week 36 took me barely two hours to pull together yesterday and I love it as much as some I labored over. 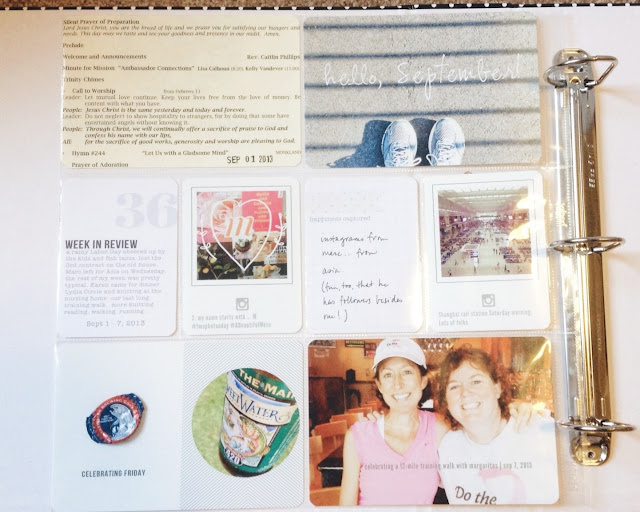 All five of the photos I included appeared on Instagram last week (four from my feed and one from Marc) and I think that’s going to be pretty typical. Three of mine were prompted by the FMS daily photo challenge and that’s probably going to be typical, too, as long as they help me tell a story. Loving Cathy Zielske’s Instagram template (used on the middle row’s 2nd and 4th inserts) – it was free on her blog a few weeks back.

I had more time last night and made the album cover page (I still need to add two photos but I want at least one of them to include Marc and he’s not here!) I am kind of in love with the color scheme of black & white, with pops of gold and kraft. Maybe because it seems fall-ish? 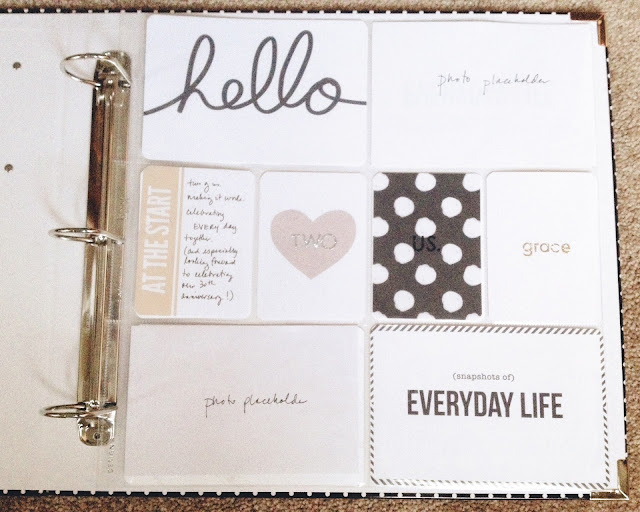 …another lesson learned is that quick blog posts are more likely to happen with iPhone photos edited with PicTapGo or Afterlight – and no links!